This is the future. Self-driving cars are in development. Dwayne “The Rock” Johnson is considering a presidential run. There are more obese people in the world than malnourished people. Multiple Kardashian-Jenners are pregnant. Dramatic political and social developments are unfolding at every moment. And sometimes we need to step back and notice the little things in life, the small gestures—good and bad—that humans make towards one another. These are the moments celebrated by the Good Guy Greg (GGG) meme.

Good Guy Greg is one of the Internet’s most enduring memes. It first arose way back in the Stone Age that was 2011, and it’s been in use on and off ever since. GGG usually pops up as a response when someone does something unexpectedly kind or generous for another. For example, in a story directly out of my own life:

I’m not lying, that literally happened to me this week, so shout-out to the Good Guy Greg in my history class. Hey, buddy, if you’re reading this: do you have notes from last Wednesday?? Because I can think of a great way for you to maintain your GGG status…

But I digress. Most of the time, the people we meet aren’t rushing to go above and beyond what’s expected of them. People can be pretty awful at times, and for every Greg that you meet, you’re bound to meet his counterpart: Scumbag Steve.

Steve is used exactly the same way that Greg is, except for the nasty things that people do, not the good ones. Often, Scumbag Steve is depicted as using marijuana or drugs in an irresponsible or just plain scummy way, but rude behavior or accounts of someone taking advantage of another also calls for the Scumbag Steve treatment. For example, if you’re on the LIE and someone in the left lane suddenly notices that you’re passing the Grand Central and they decide they have a desperate urge to get off at Main Street so they cut across multiple lanes of traffic WITHOUT SIGNALING. (What, no, my obvious angst is not because this is a story from personal experience, why do you ask?) This is the meme that would result from such an encounter:

I think it’s pretty safe to say that we’ve all met a Steve at some point or another. He’s that guy who never seems to be thinking about the ways that things he does affect other people.

To some extent, we’ve probably all been a Steve at some point. Ever used the last sheet 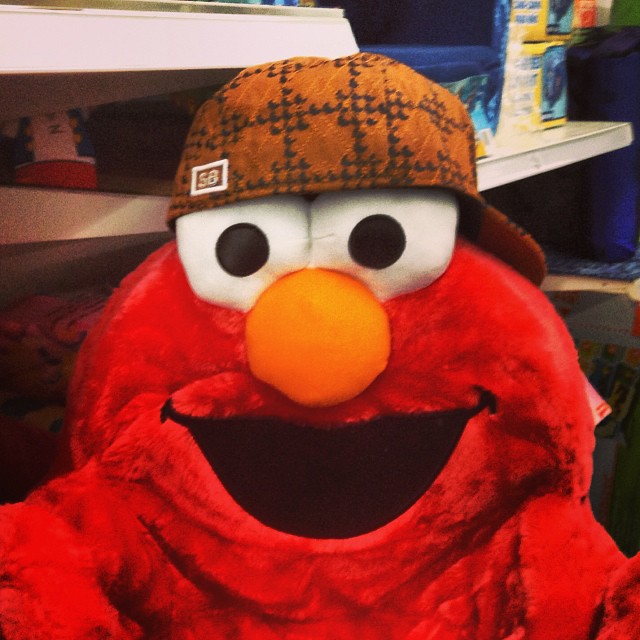 Scumbag Elmo? This is why I generally avoid Times Square. Via Mike Mozart on flickr

of toilet paper without replacing the roll? Get treated for dinner and chosen the most expensive item on the menu? Left dirty dishes behind for your roommates or family members to wash? You, my friend, have Steved. In your case, we’d take Steve’s signature cap and Photoshop it onto your picture, making it clear to the world what kind of person you are.

Ok, that sounds a little harsh. After all, just because you pull a Steve once doesn’t mean we should condemn you to a lifetime of being received as nothing more than a total Scumbag.

So what about the guy in the picture, the man whose face is the literal representation of Scumbag Steve? Does he have to live with the appellation “Scumbag”? Who is the real Scumbag Steve, and what is his life like post-meme-ification?

This time we have an answer. Unlike the model in the stock photo that became UHST, Scumbag Steve has been identified by the Internet-at-large. His name is Blake Boston, and the picture that became a meme phenomenon comes off of his MySpace page (feel free to chuckle at the reference to MySpace). In an interview with knowyourmeme.com, Boston said that “the specific picture that’s really the original meme was taken when I was 16 looking into at my mom cuz she was torturing me for photos.” Though Boston has been accused of looking stoned in the picture (a point on which he is rather vague, saying, “Was I wrecked at the time? I don’t remember…”), he also does have the put-upon look of someone who rather desperately wants his mother to just stop taking pictures of him, and I think we can forgive him for that. Sure, this quote makes him sound somewhat dismissive of his mother, but given the circumstances I don’t think it’s fair to label Blake Boston as a Scumbag Steve because of that.

In fact, it’s probably not fair to label him a Scumbag at all. Look, I’m not claiming to have any deep insight into Blake Boston’s life, but here’s how he described himself in 2011: “I’m 21. I go to school full time at night and work full time during days at a job… I’m tryin’ to get on my grind cuz I have a baby boy on the way. Really, all I do is work and school and try to split time between family, my girl and my brothers.” Does this mean that Boston is a perfect guy? No. And, true, we only have his side of the story—who knows what he’s really like? He could be a Good Guy Greg for all we know. Or he could be a real Scumbag Steve.

Regardless of what his personality is, Blake Boston is a real person. By coming forward and acknowledging the Scumbag Steve as being his picture, Boston put himself in a position to be attacked by internet trolls, those charming individuals who use the anonymity of the Internet to belittle others purely for amusement’s sake. To this, Boston has said, “I guess people can’t separate the meme from the real me in some cases.”

On the other hand, Boston has been able to capitalize on his fame. In 2012, Boston pursued his dream of having a career in rapping with his song “Scumbag Steve Overture.” The video currently has 2.7 million views on YouTube. (Heads up: I can’t, in all honestly, recommend this video or song. In fact, I’d warn you away from it, but the link is there if you’re really enthralled. Caveat emptor.) So there are definitely positives and negatives to being that-guy-from-the-meme. Is this the real Good Guy Greg? Or is this a fake? Via imgur

But it’s not for everyone. Remember Good Guy Greg? Nobody is really 100% sure who he is. There is supposition that an Alaskan fisherman is the real Greg, but there has never been any confirmation of that. Greg’s true identity remains a mystery. For all we know, the man we know as Good Guy Greg could very well be a Scumbag Steve.

It makes you think: Is that a Good Guy Greg move, not capitalizing on unexpected fame? And is seizing the opportunity that is presented by Internet fame necessarily a Scumbag Steve-ism? Or is there merit in either course of action? And to what extent are we judging real people by the way that they are represented as memes?