I packed next to my cardigans and tampons, my three Tyler Perry DVDs, counted among the essentials for my impending freshman year of college. They fit neatly at the bottom of my suitcase, flush against the bottom, the hard plastic a contrast to the soft fabric cushioned against it. I’d found them in a 5$ bin at Best Buy and placed them on the conveyor belt along with the power cord we’d come to buy. Do you really need them, my mother asked, as she always asked about anything that wasn’t water or air. I did, I assured her. I needed them like water or air.

You wouldn’t think to look at it, but at the bottom of this bin, curled into a ball, is my existential crisis.

They were artifacts of my adolescence, and I needed them desperately to pacify my transition to adulthood. Though, I didn’t yet have the range to interrogate Madea and all of the other characters that were so familiar to me. I cannot recall the first time I saw a Tyler Perry play or movie and in trying to recall, I was inundated with false memories suggesting a degree of cultural omniscience in my little corner of the world. I grew up in a somewhat restrictive evangelical Christian culture and community that loved to tell us what we could not do. All aspects of secular culture were censored and culled of any undue influences, Harry Potter, Will & Grace and the like. But Tyler Perry and his Jesus adjacent messages of family and faith were determined to suffice the puritanical parameters.

Medea was the granddaughter of a sun god, a scorned woman who poisons her lover’s wife and then her own children in a breathtaking display of feminine retribution, willing to harm even herself in order to hurt the man who cast her aside. Madea, performed in drag by Tyler Perry, killed her husband with a sweet potato and poison pie to thunderous applause from black women in the audience who have thought about following the same recipe. Madea, a contraction of Ma dear, has usurped the formerly spelled and formerly vengeful tragic figure in our collective popular consciousness.

Poison is good for the skin, I promise.

The house that Madea built sits on a former Confederate Army base, which is perhaps the first truly ironic thing Tyler Perry has ever done, and is larger than Warner Brother and Disney studios combined. The studio’s logo un-ironically resembles a cross, the square acreage could comfortably fit a mega church as well as the ego of a prosperity preachers and his rationalizations. Black Hollywood flocked to Atlanta in lieu of a proper religious pilgrimage. They wore their Sunday Best, on brand.

Not all are seduced by this triumph. In a scathing encapsulation of his ethos, Roxane Gay writes, “Tyler Perry would have us believe that his conception of God is everything.” She challenges his artistic merit and cultural capital on the grounds that he does a disservice to his audience. His portrayal of black women in particular hinges on a moral code he believes women should adhere to. Women who deviate are punished and are subsequently rewarded for the course correction. 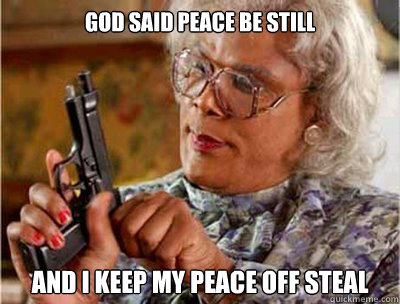 Initially, I hesitated to interrogate that what Roxane Gay wrote; that it might have some credence when it comes to Tyler Perry’s moralistic portrayal of black womanhood. Part of the hesitation comes from not wanting to diminish all what he has accomplished. His greatest achievements arguably are the opportunities he created for black creatives. His films are responsible, in part, for making actors such as Idris Elba and Taraji P. Henson relevant in the mainstream. Viola Davis, who if she had the same amount of opportunity as Meryl Streep, might be similarly accredited, had one of her first big roles in Tyler Perry’s Madea Goes to Jail. We talk about the need for diversity in media, and yet even your most favorite studios (looking at you Disney) only have a cursory interest in diversity that will only last as long as it’s financially and politically profitable. For underrepresented groups, the impetus is on us to make ourselves visible, and that is what Tyler Perry has done.

At the intersection of this hesitancy towards meaningful critique of Tyler Perry is the black church. The black church is a community that is insular and sometimes suspicious of outsiders. It is also a community that by and large agrees with Tyler Perry’s moral stances, as it is a culture far more condemnatory of the sins of women than of men. I don’t really go to church as much anymore, but I went last week at my grandmother’s behest. I stopped going to church when I could no longer rectify my lived experience with the doctrine drummed into me with the persistence of rainfall. I was surprised at how much had changed. I was surprised at how easy it was to sit in the blood-red pew. I knelt for the duration of the intercessory prayer, and it hurt, but I stayed. I drank two cups of vegetable soup in the fellowship hall after service, burned my tongue.

And one bathroom break. After that, you’d better hold it.

I watched Tyler Perry’s movies at times when I most missed home. Madea is at once familiar and strange, as caricatures are wont to do. Pieces of her could be found in all of the women in my community, church and family. Her catchphrases complimented our own lexicon. There was a great deal of pride to see our own faces stretched across. Critics derided him, but we continued to watch and fill his coffers. My mother, grandmother, aunts and I made periodic pilgrimages to the movie theaters to watch the film adaptations of the plays we had rented from Blockbuster after church on Saturdays. We sat next to other black women who had just come from church or who would be on their way as soon as the credits rolled. His stories, invariably about black women, and his brand supported by black women, provided the mortar and pestle for Tyler Perry Studios. His legacy, built standing on the shoulders of black women.

I don’t believe in nostalgia. I am not interested in looking at cultural artifacts through rose colored glasses. The conflict of not wanting to tear down a black man would come at the expense of my defense of black womanhood, and perhaps to challenge what I have been taught my whole life and what was echoed back through my Tyler Perry DVDs.

Depending on where something lands on our tongue, we taste salty, sour. Bitter at the back, almost the back of your throat and sweet sweet on the very tip. With Tyler Perry, I taste everything at once.

This site uses Akismet to reduce spam. Learn how your comment data is processed.