When trying to figure out what I would write my next blog post on, I thought: hmmm… is there anything I could write about including politics and good ole’ Turkey Day? So I did some research and came across loads of articles expressing the common grave mistake of bringing up politics at the Thanksgiving dinner table. I don’t know about you, but growing up I was always told there was something I should NEVER mention at the dinner table with family and friends: POLITICS. Well, of course politics sometimes came up at family and friend dinners, but I always knew how close my direct family was with others on whether or not we were able to discuss politics and if so, in a civil manner.

So why is politics such a terrible topic to bring up during dinner?

Yes, I understand people have differences in opinions, but most people are able to talk about things they disagree on without feeling the need to strangle one another. Why should the topic of politics be so different? Well, maybe it has something to do with how legislation affects certain people, or maybe it’s all ego. Because, when you think about it, are democrats and republicans that different? Sure, the radicals and extremes of each party can be a bit scary, but most people who choose to associate themselves with one party or the other generally tend to fall somewhere in the middle of the political spectrum, but choose to prioritize certain values that correspond with a certain party.

So this photo right here: Is being a little dramatic. Yes, people fight over politics, but what they seem to forget is that we’re all hoping for the same thing in the end: a way to improve and better ourselves. Sometimes, we don’t always agree on how, but the point is, is that people care and want to make a difference.

Sit back, relax, enjoy your food and food baby, and talk about whatever you please, especially politics. Politics should not be a subject people are afraid to bring up, it’s just politics! What’s the worst that could happen? Someone disagrees with someone else at the dinner table? SO WHAT! Last time I checked, controversy makes things more interesting, and who doesn’t like a little drama in their lives? The more people talk and discuss politics, the more educated and the more likely to participate in voting and legislation people will become.

So basically my purpose in life is to scold all of you for shying away from discussing politics whenever, wherever.

I just wanted to leave you all with something interesting I found today: 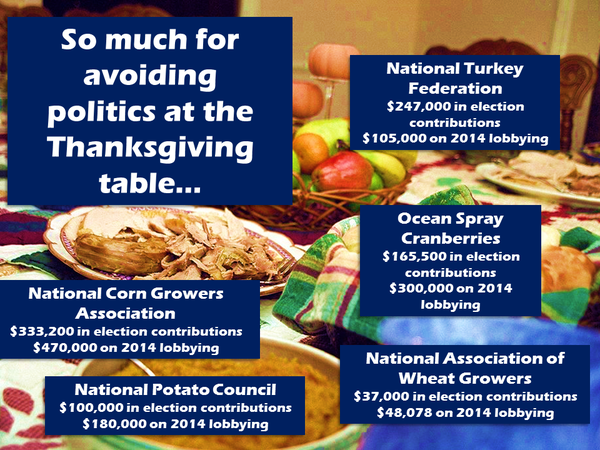 Just something to think about…